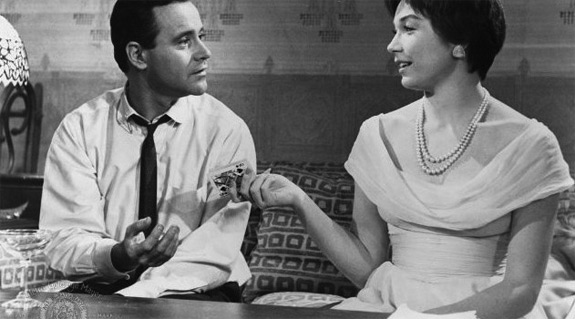 “Why do people have to love people, anyway?”
Patrick Coffin

Few movies can be at once savage and sweet; fewer still while straddling more than one genre. Billy Wilder’s The Apartment (1960) manages all of the above. Dubbed a comedy at its debut, this study in after-office-hours hanky-panky bears an undertow of melancholy—and with the deceptively light touch of co-writer-director Billy Wilder.

Audiences weaned on Jim Carrey slapstick or the gnarly fare of the Farrelly brothers are simply not accustomed to this level of style and sophistication. There is rich and ironic humor throughout, but this is a movie that invites you to think perhaps even more than to laugh.

For his efforts, director Wilder shared an Oscar with his co-writer I.A.L. Diamond for Best Writing, Story and Screenplay Written Directly for the Screen (in the old Hollywood nomenclature) along with Best Director and the coveted award for Best Picture. This is a rare hat trick. Only 13 films since 1929, the Awards’ first year, have won three or more of the famous Big Five nominations—Best Picture, Best Director, Best Actor, Best Actress, and Best Screenplay.

Mr. Diamond also wrote Some Like It Hot, the previous year’s hit, which was also directed by Wilder. He was at the top of his game with The Apartment, which became the inspiration for the Neil Simon/Burt Bacharach hit musical Promises, Promises (1968).

C.C. “Bud” Baxter (the peerless Jack Lemmon) is a medium-low clerk in the nondescript Consolidated Life Insurance Company who, as his opening voiceover discloses, “has a problem with his apartment.” He has agreed to allow his modest Upper West Side flat to be used as an after-hours trysting spot by four managers at Consolidated. His opening lines frame the tale against the dry numbers that are the lifeblood of the actuarial set: “Our home office has 31,259 employees, which is more than the entire population of uhh… Natchez, Mississippi. I work on the 19th floor. Ordinary Policy Department, Premium Accounting Division, Section W, desk number 861.”

We see hundreds of nameless, fedora-wearing functionaries striding briskly alongside harried secretaries to a bank of jammed foyer elevators. Another corporate workday begins. The movie’s title suggests alienation and atomization: apart-ment, the state of being apart. The skyscraper itself is a sort of New York City in microcosm. Each floor features long rows of cramped desks behind which scores of nondescript staffers punch away on their calculators and staplers. The rich black and white photography by Joseph LaShelle (which earned him an Oscar nomination) conveys a bureaucratized, nameless humanity.

The Apartment is arguably the last great film from the era of black and white cinematography. Color film techniques had been around since the early part of the 20th century but only slowly began to dominate the industry, partly in order to out-dazzle television viewers who had begun to stay away from theater houses in droves after the Second World War. The only black and whites to win Best Picture Academy Awards since The Apartment have been Schindler’s List (1993) and The Artist (2011), both of which were visual homages to bygone eras.

LaShelle’s work on The Apartment provides a visual study of the moral themes (black and white vs. shades of grey) explored by the story itself. From the dinghy, washed out surroundings of the movie’s eponymous New York flat to the bright accents of the Christmas party scenes, this is a beautiful movie to watch.

Bud is backslapped and patronized as “Buddy Boy” by his philandering superiors, and seems as small and shabby as the apartment he loans out for his bosses affairs. We like him, feel sorry for him, and by the third act we’re really rooting for him.

Jack Lemmon’s performance snagged him a Best Actor Oscar nomination. He had already won the Best Supporting Actor Oscar for Mister Roberts (1955) and would go on to win the Best Actor for Save the Tiger (1973). One actor who never forgot that Lemmon was overlooked in The Apartment was Kevin Spacey, who dedicated his Best Actor win to the man who’s performance 40 years before had inspired his own portrayal of Lester in American Beauty (1999).

Lemmon was a favorite player of Wilder, who cast him in seven of his films. The je ne sais quois that made the him a national treasure and a mentor for three generations of actors is on full display in this winsome performance. (Embarrassing brush with fame alert: I stood a few feet from Mr. Lemmon at a cocktail party at the Shrine Auditorium before the Academy Awards ceremony in 1997, but was too awestruck to walk up and thank him for his work.)

As a character, C.C. Baxter is part Willy Loman, part Caspar Milquetoast, with a dash of Walter Mitty. He is by turns earnest, resentful, loyal, drunk, and funny—above all, he’s the owner of a spectacular dollop of naiveté.

Unlucky in love, Bud lives the life romantic only vicariously. And his upward mobility at Consolidated Life proceeds apace with his willingness to loan out his digs for extramarital liaisons. Bud’s an arms dealer who connects the arms of married men to those of their mistresses. The cost of his career advancement is the sullying of his own bed sheets—a price Bud seems willing to pay.

His dulled conscience gets the jolt of a lifetime when he learns that the girl he’s sweet on, pixy elevator girl Fran Kubelik (Shirley MacLaine) happens to be the object of lust of the company personnel director Jeff Sheldrake (Fred MacMurray, playing against his Nice Guy type). What kills Bud softly is that Fran agrees to play apartment ring-a-ding-ding with the smarmy Sheldrake.

Predictably enough, Bud—the picture of male passivity—waits until the jolt wears off. He must fall into a deeper hole before finding his inner hero.

The character of Fran is also, in her own way, naïve, but instead of fleeing the risks attached to true intimacy, she removes her boundary filter altogether. “I just have this talent for falling in love with the wrong guy,” she ruefully admits, “in the wrong place at the wrong time.”

Fran and Bud are the yin and yang of neediness. She can’t say no to bad a relationship and he can’t say yes to a good one. You can tell that Bud wants to be the “mensch” his neighbor Dr. Dreyfus tells him he should be. And Fran is sick and tired of being sick and tired; indeed, she tries to commit suicide by downing a bottle of Bud’s sleeping pills. But neither can seem to get to where they need to be. What do you do? Throttle these people or hug them?

The Apartment was released the same year the Federal Drug Administration approved Enovid, the first contraceptive pill. And the sexualization of the workplace depicted in the movie anticipated the more noxious wake of the sexual revolution in the decade to come. Contemporary guesses at how things were in the 1960s (like cable TV’s Mad Men or the short-lived Pan-Am on ABC) don’t quite capture the sly sophistication of The Apartment, a true original.

The movie doesn’t endorse its underlying theme of infidelity so much as mine it for comedy potential (the close ties between comedy and pain are well known). Put in Christian terms, the presence of sin forces both Bud and Fran to choose who they want to be. The problem, though, with lovelorn Bud—and with love-burned Fran—is they have compromised themselves out of the game.

Fran Kubelik’s moral conversion, as it were, comes when the Sheldrake hands her a Christmas gift in the form of a one hundred dollar bill—a big spender amount back then. As he dangles it in her face like a satisfied john, Mr. Wilder holds a close shot on Ms. MacLaine so we can drink in her contempt for the man who will never leave his wife. We know Fran well enough, too, to know she won’t leave him, either.

One of the charms of The Apartment is its setting in time. We first meet the lonely Bud Baxter in the weeks leading up to Christmas, and so Christmas carols are an integral part of the musical setting. Director Wilder milks the maudlin out of the kind of “holiday carols” you’d find in a seedy tavern filled with lonely barflies: tinselly tunes bespeaking a Christmas without the Christ part. The cognitive dissonance is effective.

Waiting for love is the definition of Advent. But love is not quite requited on December 25th for Bud Baxter. He must wait some more. Moments after midnight on New Year’s Eve, when his beloved Miss Kubelik (he never once calls her Fran in the movie) wakes up to who really loves her and arrives at the apartment moments before Bud moves out. Her rapturous run to that apartment sets up one of cinema’s classic exchanges when Bud looks at her and says, “Miss Kubelik, I absolutely adore you.” To which she replies: “Shut up and deal.”

In the midst of a corrupt business environment where sex competes with career advancement and true romance is for suckers, Christmas comes late for Bud Baxter, but not too late.

And that’s about it, Cinephile-wise.