Most people flee from labels like “dirty trickster,” “buffoon,” and “prince of darkness. Presidential advisor and author Roger Stone revels in it. Splashes around in it so as to defuse its sting. Most of what you think you know about him is written by his enemies.

As this interview was conducted, Stone was facing a 40-month jail term for seven counts handed down by a twice-Obama appointed judge and a hopelessly biased jury. Time will tell whether he gets a presidential pardon.

The Truth About the SSPX

In this commentary, I shed some light on the backstory of the Society of St. Pius X (SSPX) and analyze their claim to being fully Catholic already.

Decide for yourself where the truth lies. 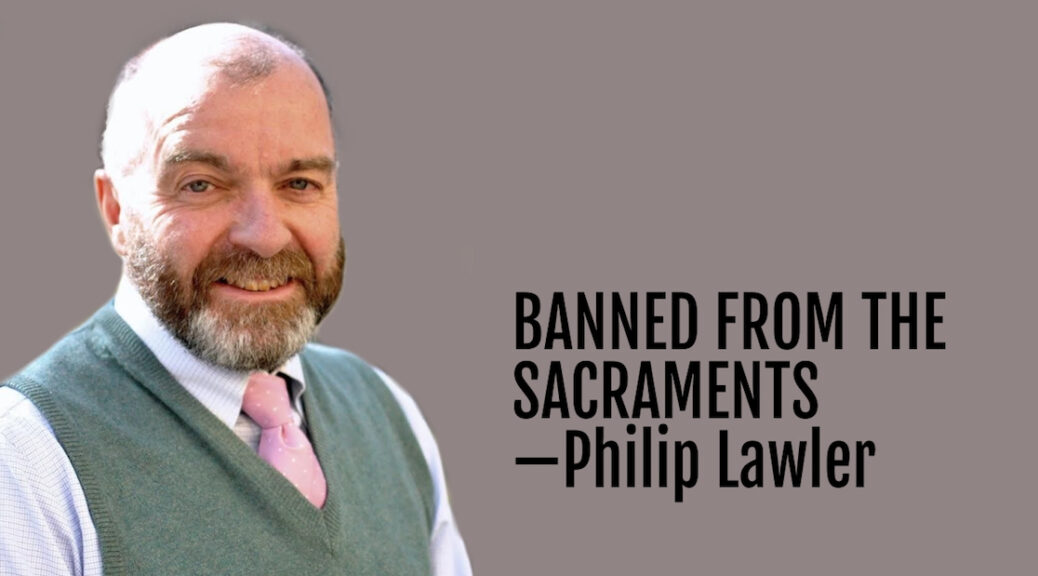 #177: Banned From the Sacraments—Philip Lawler

Phil Lawler has the long view of things. A professional journalist and editor for over 30 years, he has a broad sense of perspective. The CCP virus lockdown has introduced a serious threat to Catholic life insofar as the Council of Trent defined that the Sacraments are necessary for salvation, and that canon law (c 213 and elsewhere).

While Baptists ministers are getting arrested and fined (and refusing to pay), and they don’t have the Real Presence and no eucharistic Lord to adore, how come the bishops as a whole seem adamant in backing the secular refusal to see religious services as essential? Why are creative workarounds—which respect medical distancing protocols—of no apparent interest to our bishops? 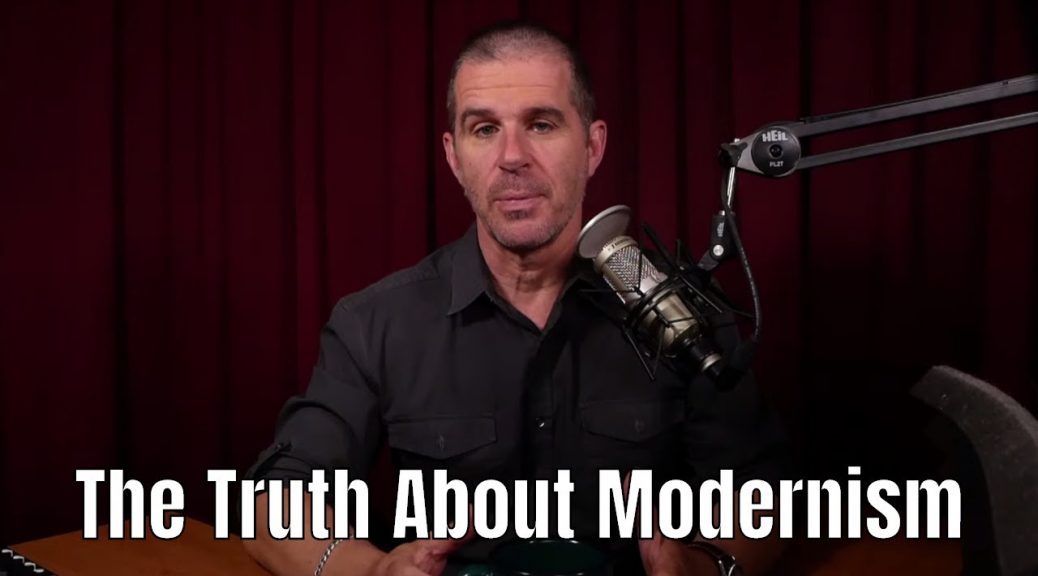 The Truth About Modernism

For Catholics, the heresy of Modernism has tentacles that have insinuated themselves in the life and thinking of the Church for over 100 years.

If so, then you have some familiarity with modernism.

Modernism with a capital m was a kind of loose movement that began in the late 19th century and early 20th century mainly in Europe among Catholic theologians some of whom were priests.

All of the first generation modernists were professors and writers and their ideas began to gain Traction in seminaries and the formation of priests.

There was a kind of a trickle-down effect of modernism to out the world of religion textbooks, spiritual direction advice, and approaches to catechesis and evangelization.

Modernism is an idea virus.

And our minds were made to grasp and live by the truth, not be subject to infection by a virus. 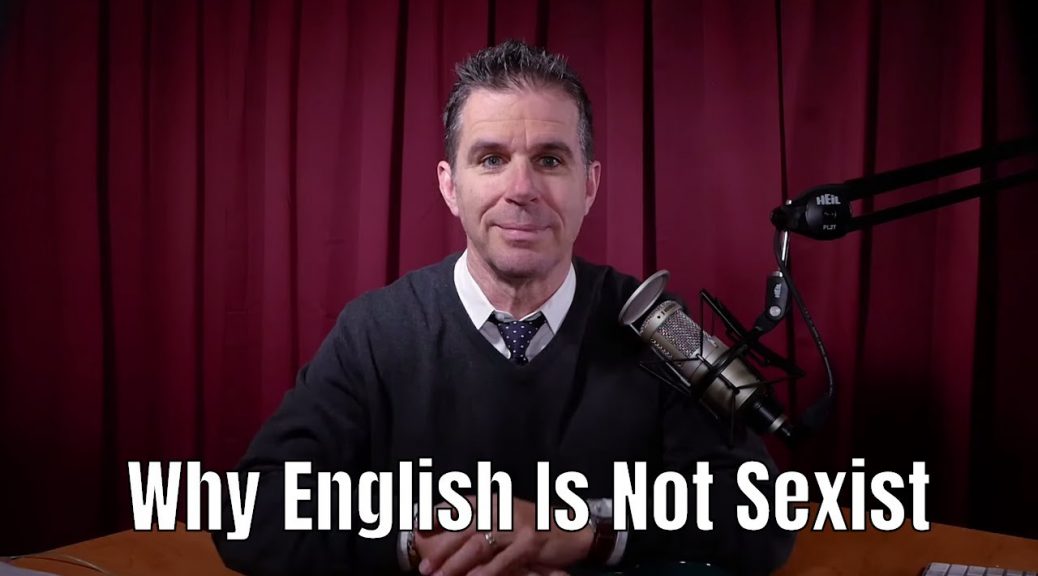 Why English Is Not Sexist

How many times have you been told that English is sexist because it uses the masculine pronoun “he” or the generic noun “man” to mean both males and females?

In this video, I’m going to show you exactly why the English language is not sexist, does not exclude anyone, why the attack on it is illogical, and why it should be should not be bowdlerized to accommodate feminist ideology.

When I was a brain-dead liberal, I bought into the presupposition that some intangible harm came to women—somehow—because of the use of the masculine pronoun for the human race.

It never really occurred to me or my fellow travelers to accept that the onus was on us to prove that some real-world harm or insult was being leveled at females because of the structure of English.

But in SJW culture, the important thing is to announce that you feel offended, not to actually prove that pronouns are the culprit.

In English, the word spelled “he”  can mean “that male” or “anyone, male or female.” The word is fluid. And the usage is ALWAYS clear from the context.

… A Catholic should understand what he believes.
… Man cannot live on bread alone.… To each his own…. He who speaks does not know, he who knows does not speak.

—are all examples of the generic use of the masculine pronoun, meaning the human race. As William Safire wrote in “The New York Times,” the male embraces the female.

The idea of one word including other realities comes naturally elsewhere in English, as well: nobody gets confused if you put a fork in the dishwasher, or if you order a cup of tea at a coffee shop.

The claim that English is exclusive and somehow damages women is illogical. It’s just dicta, thrown out there, as though self-evident. Imagine a woman at a feminist university walking into a dorm room recreation room and asking a bunch of women, “You guys want to order some pizza tonight?”

Nobody would bat an eye.

In 1863, when Abraham Lincoln at Gettysburg spoke about “a new nation, conceived in liberty, and dedicated to the proposition that all men are created equal” — not one of his hearers thought he meant that abolition only applied to male slaves.

If you think about it, the divisive party in the battle for linguistic sanity here is feminism, not the English language.

The whole movement divides people into the sheep who accept the feminist presupposition that English is sexist, and the goats who disagree and who speak and write in standard English, as it comes to us from Middle and Old English, and the Anglo-Frisian languages before that.

Imagine if English was structured the other way around, so that the word MAN meant only male, and WOMAN was the generic word, meaning both female and the human race.

This would still be rejected by feminists, because the complaint would say that English is very male-biased—the word woman is forced to do double-duty and carry the load of “race” and “female,” whereas males get their own special word, man.

One thing I’ve noticed, though, is that feminists don’t complain that Satan is always described in the Bible as he.

Subscribe to this channel, and join the www.coffinnation.com community. Find out what members in 25 countries love as they grow in the knowledge of Christ and restore the culture around them! 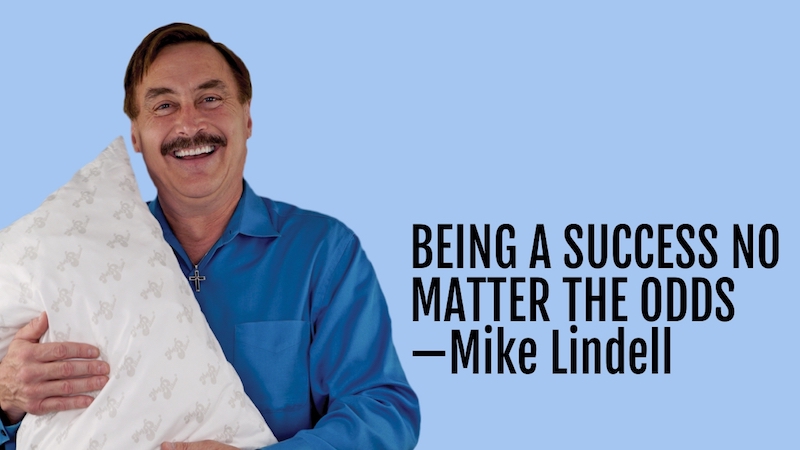 #176: Being a Success No Matter the Odds—Mike Lindell

It’s been a year since I interviewed CEO and founder of MyPillow on the Patrick Coffin Show. Back then, my motive was to talk about his role in producing the pro-life hit film Unplanned and to hear some more of his crack-addict to CEO story.

Little did I know how much more there was to the story. And then in late March, I saw Mike giving some remarks in the Rose Garden standing next to President Trump. I watched and listened to Mike’s plan to be part of the solution to the CCP virus lockdown: he would convert over 70% of his manufacturing operations away from pillows to USA-made cotton face masks to help make up for the shortage.

But when Mike invoked Bible reading, encouraged people to spend more time with family—and thanked God for Trump’s work—all hell broke loose and Mike Lindell was attacked by the usual leftist mob. This recent interview focused on his willingness to bring his Christian faith into his very public work. 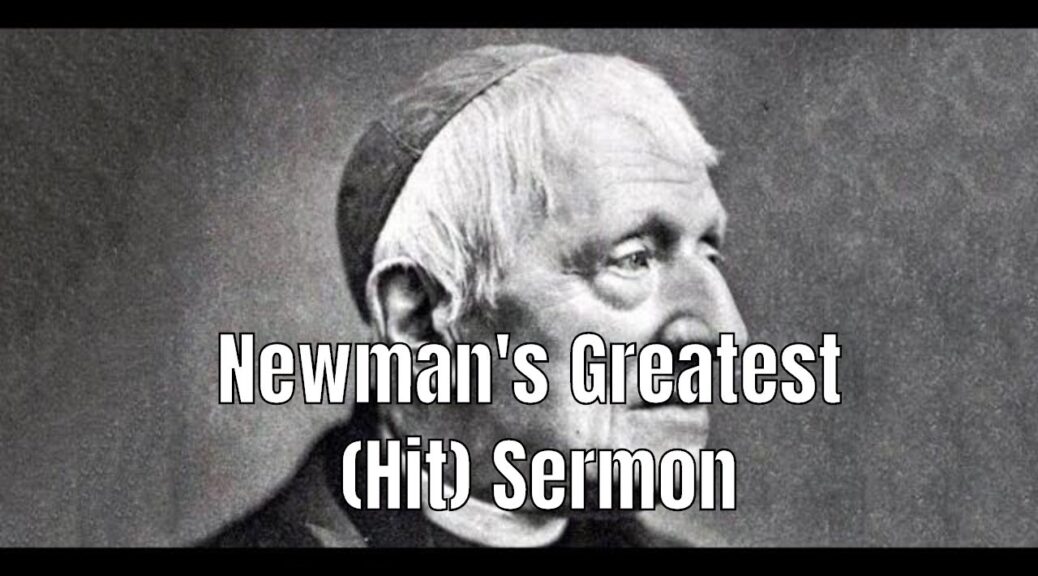 In this video, I present the final words of one of St. John Henry Cardinal Newman’s greatest homilies, “On the Mental Sufferings of Our Lord In His Passion.” Truly an astounding work of spirituality in Newman’s inimitable English elegance. The great man of letters describes as far as humanly possible the inner anguish involved in taking on every human sin in history. The result is a moving piece of Christian preaching by what many observers regard as a latter-day Doctor of the Church. Full text below. A war against the United States and the West has been raging under our noses for decades.  This war is by definition covert and has many fronts: military, technological, political, and social.

The problem is so few people know it is being waged. Until now. Retired Air Force Brigadier General Robert Spalding, a China expert and former Defense Attache to China in Bejing, China, has written a jaw-dropping book that every American should read. It’s called Stealth War: How China Took Over While America’s Elites Slept.

This is the kind of book that will keep you up nights. And yet it is full of hope and confidence that the challenges presented by the Chinese Communist Party to freedom lovers around the world will eventually be overcome, perhaps sooner than we think. Spalding’s book represents the red pill in a matrix-shaped and reinforced by decades-long propaganda. 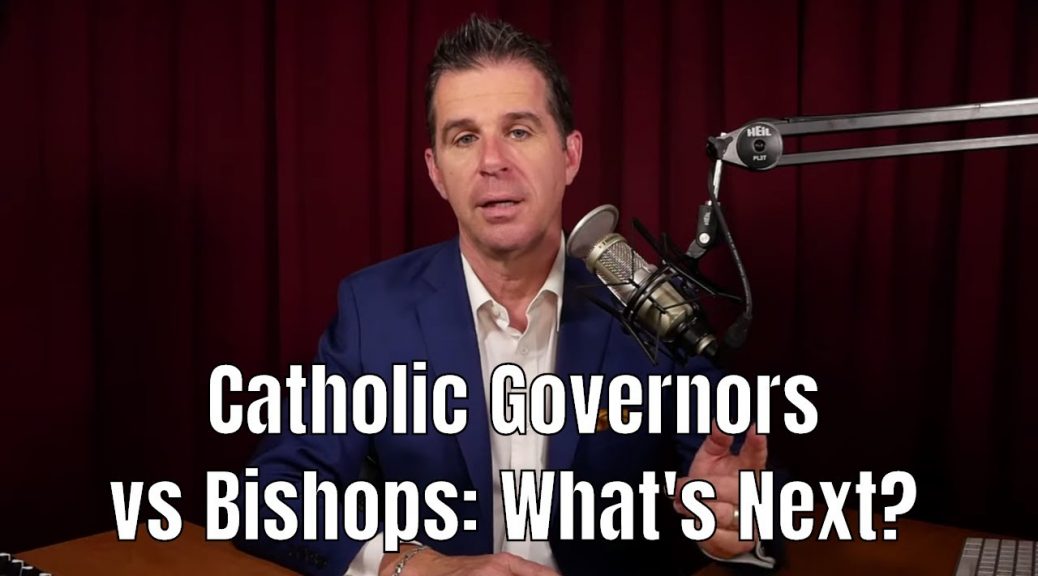 Catholic Governors vs Bishops: What’s Next?

Will the Catholic Bishops in the United States restore the Mass and provide greater access to the sacraments? That’s the question a lot of us are asking. Canon lawyers like Cathy Caridi and Dr. Ed Peters have weighed in with their concerns and skepticism.

Professor Janet Smith has spearheaded a lay-led effort to urge the bishops to reconsider the total ban on Church attendance and forbidding things like confession. I will be talking with her about this on Monday, April 6th at 12 noon, Pacific 3 p.m. Eastern on a live stream Hangout, simulcast on Twitter, Facebook and YouTube.

Catholics are watching a very strange battle unfold before their very eyes.

Texas governor Greg Abbott and Florida governor Ron De Santis are both pro-life Catholics,  and both have refused to shut down churches and synagogues describing places of worship as essential services for the citizens of their state. But the bishops of both States disagree and have in some cases gotten ahead of Caesar to impose an absolute ban on even stepping foot inside a church. It is strange indeed to see the civil authorities regard Church attendance as an essential service,  and refused to close the doors of churches and synagogues…with the Church leaders themselves strongly disagreeing.  And don’t get me wrong;  no one but a professional Bishop Basher thinks that our fathers in Christ woke up one day licking their chops, and plotting how they can best keep their people away from the Lord in His Sacrament. Without a doubt, they believe they’re acting in our best interests. But this situation is even more chaotic when it comes to Catholics in Canada.

The Archdiocese of Halifax where I grew up has imposed to total ban on Church attendance. Same with Toronto. But the Bishops of Alberta disagree and you can go to church in any diocese in the province of Alberta.

Don’t believe me? We should start calling The Drudge Report The Dread Report. All of this dread bait is designed to keep you cowering in your house filled with fear and anxiety. Are you aware that the commie virus has killed far fewer people so far in 2020 compared to influenza A and B, malaria, AIDS/HIV, traffic accidents, and abortion? The antidote to fear and anxiety is faith in Jesus, the Son of God, and in his saving passion, death, and Resurrection. Add your voice in the link below.

The celebration of this Paschal mystery at Easter is coming fast.