The public firing of Don Cherry on Veterans’ Day, known in my native Canada as Remembrance Day, reveals a media culture way out of sync with ordinary people who exist outside politically correct urban bubbles.

The sensitive elites who run SportsNet and Rogers pulled the same stunt in 2011 with popular sports anchor Damian Goddard over his tweet supporting the 3000-year-old cultural definition of marriage—sent on his private Twitter account, after work hours. But Goddard wasn’t high-profile enough: besides, in refusing to back down he outed himself as a practicing Catholic, so the chattering classes dismissed him as a religious zealot.

But Cherry’s firing was different in degree and in kind.

For my American readers who may not know who Don Cherry is, it’s no stretch to call him a Canadian icon. In Hollywoodspeak, he’s Rush Limbaugh meets Archie Bunker in a zoot suit. For 38 years, Cherry co-hosted a feature called Coach’s Corner on the Hockey Night In Canada broadcast, covering N.H.L. games with a little man named Ron McLean. More about Mini-McLean in a moment.

Nicknamed “Grapes,” Cherry spent 20 years pounding away in minor league hockey. Reminiscent of Rudy Ruettiger of Notre Dame football, Grapes played a single game with the Boston Bruins whose coach he later became, twice winning twice Coach of the Year in his long, bumpy career. An impressive, if slow, rise to the top.

Don Cherry belongs to that generation of men who say things like, “To all you kids out there,” and “You people….” and punctuate their words with a confident jab of the finger. Too young to be part of the World War II generation and too old to be tagged as a boomer, Cherry comes off as ornery on the outside, but (you just know) baby poop in a sneaker on the inside. A hard hat man’s man who makes no bones about calling his brand of conservatism “right wing.”

His deliciously garish suits and tough talking style are matched by an acute allergy to ass-kissing, which partially brought about his present job status.

Cherry married young and stayed that way for decades, losing his wife Rose to liver cancer in 1996 after 43 years of marriage. He later quietly remarried; and for a nationally-known (albeit unlikely) celebrity he lives an ordinary life on a modest street in Mississauga, west of Toronto.

The man can also boast of an admirable track record of charitable giving and volunteering his time for others, especially on behalf of law enforcement and military members and veterans of all skin colors, whom he clearly loves.

Which brings us to the irony.

During the Coach’s Corner segment on Saturday night, November 9, 2019, Cherry went on one of his signature rants—this time bemoaning the lack of patriotism among so many Canadians including new Canadians.

I searched online to find the rant, and every single clip was edited so as to suggest the most pejorative interpretation possible, and, most galling, little Ron McLean’s positive reaction was invariably cut. This is key to the whole story.

I finally found the full clip on the Rebel News platform. With a hat tip to Ezra Levant, here is the No Good, Awful, Racist, Divisive, Terrible Bad Thing that was uttered (start 3:13, end 4:04).

Cherry is obviously talking about everyone too cheap, or not paying enough attention, to buy a red poppy for Remembrance Day to honor our fallen military heroes. (So what if he additionally mentioned ungrateful new immigrants? Are they immune from all criticism?)

Stopping short of an apology (a smart move, as mobs are implacable) Cherry has subsequently clarified that he probably should have said “everybody.” But the point is moot.

The Sportsnet brass fired him.

“Sports brings people together,” he bleated. “It unites us, not divides us. Following further discussions with Don Cherry after Saturday night’s broadcast, it has been decided it is the right time for him to immediately step down. During the broadcast, he made divisive remarks that do not represent our values or what we stand for. Don is synonymous with hockey and has played an integral role in growing the game over the past 40 years. We would like to thank Don for his contributions to hockey and sports broadcasting in Canada.”

He left out why Cherry’s remarks were so “divisive” as to warrant giving him the Golden Boot Award. And by “our values,” Yabsley means leftist values, the values of Those In the Know. I would call this a joke, but that’s an insult to jokes.

Mirabile dictu, sports fans on Twitter gave the hypersensitive Yabsley what for: 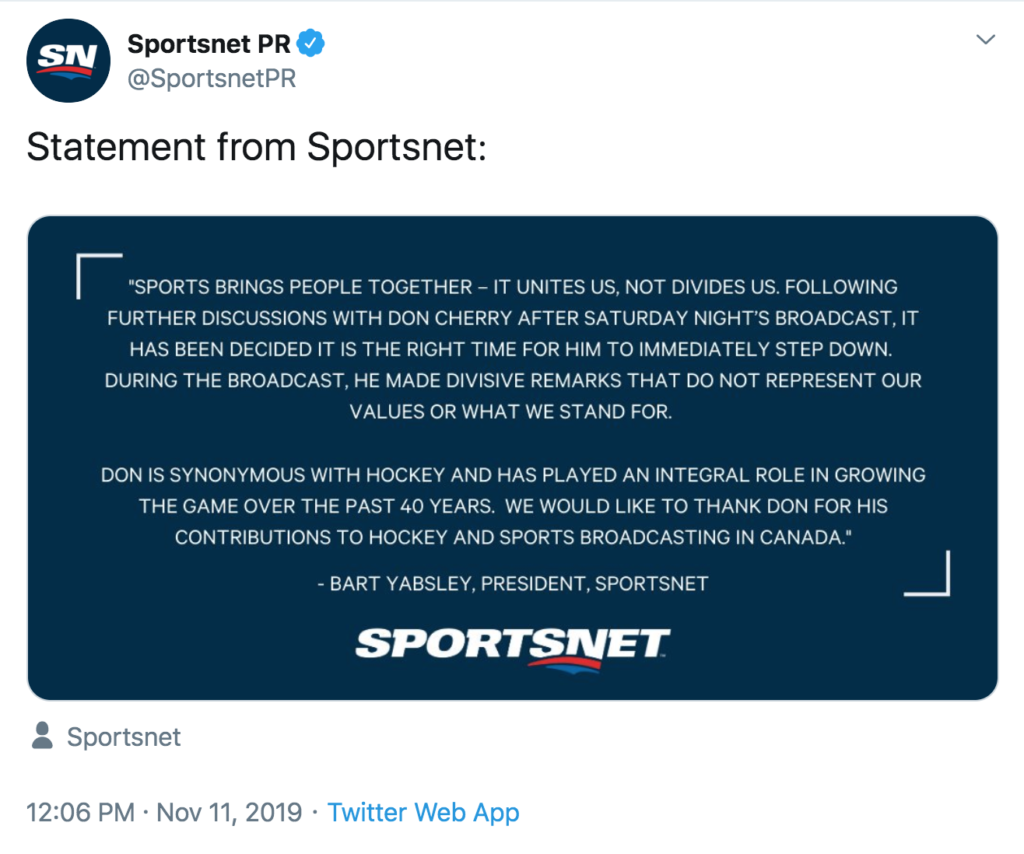 Now watch the clip again, and notice how little Ron McLean, Cherry’s longtime sidekick, repeatedly nods his approval, even giving a thumbs up and an enthusiastic, “Love you for it.” (again, start 3:13, end 4:04):

Except that, within 24 hours, little Ron McLean inserted the knife into the back of his longtime friend (?) and co-host. Behold the following pitiful wincefest (starting at 37:20, ending at 38:18) if you can stomach it: Clip.

“Didn’t notice it,” eh?  We aren’t stupid, bub. He only noticed it, he played cheerleader for it. The bland McLean owes his lucrative career to the charismatic Cherry in the first place. Sad. The fact that he apologized for “both of them” is the (koff koff) cherry on top: an astounding betrayal by an individual who cares more about money than integrity.

I don’t know a single person who buys his fake apology. I’d say his career is done. At least Don Cherry can sleep soundly at night. Little Ron McLean did a solo speech the following Saturday. His confused word salad and doubling down on his betrayal was a sad and sorry sight. Yes, in this fallen world.

Of course, he wasn’t expelled  because of this. When you’re at the top, there’s a target on your back, especially if you’re a successful conservative voice in left-tilting Canada. By putting the nonsense phrase “diversity is our greatest strength” smack dab in the middle of his faux-pology, signals that little Ron McLean and his bosses have lost the plot.

Going forward, don’t count Grapes out. Who knows what the world’s youngest 85 year-old has cooking? I’d love to interview him on my podcast after he bounces upward.

Rich is the irony in being fired on  the very day whose commemoration he wanted to highlight. No, I’m not literally comparing him to a soldier in battle (okay trolls?), but his maddening ouster brings to mind the madness of war and the willingness of our best and brightest to put themselves in harm’s way.

Providentially, if Don Cherry had to be scapegoated for mad reasons, it strikes one as fitting that it all went down on Remembrance Day.

UPDATE: Don Cherry, as I predicted, has already launched a podcast, Grapevine, which you can hear HERE

(You gotta love the rush-to-get-it-out typo on the show title.)
Godspeed, Mr. Cherry!

Want to join a community of like-minded Catholics around the world?

Join the largest culture-restoring community in the world, get on the list here: